Villages in Telangana to get 2-5 crore under GramaJoythi: CM

Chief Minister K. Chandrasekhar Rao has decided to launch “Grama Jyothi” programme from the coming Independence Day for integrated and comprehensive development of rural areas by spending about Rs. 25,000-crore in villages in the next five years.A meeting with all district collectors, joint collectors and officials involved with rural development and panchayat raj would be held on July 30 at the MCR HRD Institute to discuss about the programme, the chief minister’s office said in a release.The Chief Minister has also set up a Cabinet sub-committee headed Mr. Rama Rao with Ministers Etela Rajender (Finance), Tummala Nageswara Rao (Roads & Buildings), Pocharam Srinivas Reddy (Agriculture), T. Harish Rao (Irrigation) and Jogu Ramanna (Forest) as its members to prepare modalities of Grama Jyothi programme. The programme will allow villages to prepare action plans for development and prioritize amenities that need funding after discussions among the residents.Once the village approves the plans, the government would release the required funds over five years.Another meeting would be held on the programme with Vice-Chairman of State Planning Board S. Niranjan Reddy, Rural Development Minister and officials, district Collectors and Joint Collectors at Marri Channa Reddy Institute of Human Resources Development.‘Mana Vooru, Mana Pranalika’ already being implemented by the government will make Grama Jyothi work easy, the Chief Minister felt.The State government would sanction works based on the requirement of villages, Mr. Chandrasekhar Rao said. 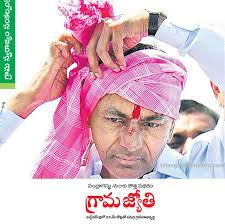 The chief minister also announced that a cabinet sub-committee headed by panchayat raj minister KT Rama Rao will prepare the policy guidelines and an action plan and submit it to the government in a week. Finance minister Etela Rajender, irrigation minister T Harish Rao, agriculture minister Pocharam Srinivas Reddy, forests minister Jogu Ramanna and roads and buildings minister Tummala Nageswara Rao will be the committee members. Every village in the state would receive between Rs two to Rs five crore over the implementation period. The funds to be released to each village will be based on their population, the chief minister said adding that the goal was to ensure all-round development of the villages in the state. The Telangana government, on Independence Day, will launch a Rs 25,000 crore Gramajyoti programme in the state. Chief minister K Chandrasekhar Rao announced on Sunday that the programme will be implemented over the next five years.