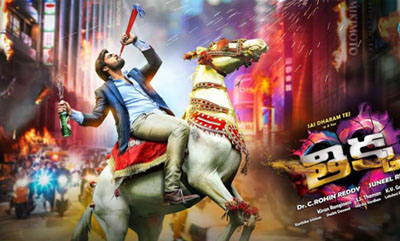 The audio launch of this movie was held on 30th July 2016 at Shilpakala Vedika, Hyderabad.  The music was released with the support of ADITYA Music Company. Tamil film actors Silambarasan and Dhanush each one has sung a song in this film. S.S.Thaman, already with his two continuous musical hits Sarrainodu and Srirastu Subhamastu, is going to play his musical magic again by this film.

The story depicts Aditya, Sai Dharam Tej, working in a construction company, falls in love with a girl. Due to some unexpected situations disputes occurs between them and later he breaks up with her. The rest of the story is about how the hero wins her love by facing many hurdles. To know about all the further consequences, the audience has to keep track of the movie. Rajendra Prasad, playing as Hero’s father would be an important role and Brazillian model Larissa Bonesi was making her debut into Tollywood. Nagababu has presented the script to the director Sunil Kumar Reddy. Allu Aravind sounded the clap board, while Telangana Minister Mahender Reddy switched on the camera for the muhurta shot.  Dill Raju directed the first shot. This Mega Nephew action hero was turning up his career by accepting crazy projects with new directors.  Director Sunil Reddy said, “Everyone is a hero for his own life, but in this film hero is the villain for his own life.” So the audience can expect a thrilling as well as the hilarious attitude of Sai Dharam Tej in this film.