The movie produced by Bandla Ganesh on Prameswara Art Productions banner. The movie was scheduled with fast shooting and completed before January and has delayed due to other films releases and finally the movie is going to hit theatres on Valentine weekend. 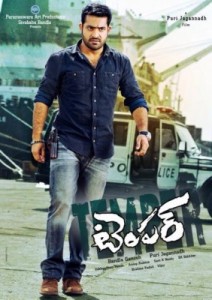 The movie didn’t get attention while project is going but after Teaser and Trailer were unleashed the market has suddenly increased for this project. Dialogues were performed in an astonishing way by Jr. NTR in this movie. Especially when Teaser got unveiled into market on 1st Jan 2015 with dialogue of Daya Daya gadi dandayathra became very famous on social network.

All the cast and crew are waiting to taste the success for many years. The first man to show about Jr. NTR who praised as star hero in Tollywood. But he didn’t gave single success after 2010 and his last block buster was Brindavanam movie.

Even his earlier movies Badshaah got a crazy attention but couldn’t cash it by presentation of movie. Then after that two back to back disasters with Ramayya Vastavayya and Rabhasa made NTR fans so depressed. Many critics are portrayed him that NTR will give only chance to hit director but unable get hit with those directors. After this again he changed his mind and started in a new way with this project and next with Sukumar.

Director Puri Jagannadh is one of the star directors in Telugu Industry and he did few movies in Bollywood too. He mainly considered as fast in and out completion and gave many memorable hits to many star heroes in Tollywood.

But his recent performance was below par and got many failures with last two movies are Iddarammayilatho and Heart Attack. Both got an average talk. Tarak was presented in a new look by Puri and will see how much it works. Especially dialogues seems very good trailer and many fans are eagerly waiting for more powerful dialogues by NTR in Temper.

Kajal Aggarwal is lead heroine in this movie and she hasn’t scored a hit since two years in Telugu movies. Last year with Ram Charan project got an average talk so this success will enhance her career. Madhurima also playing an important role in this movie while Sonia Agarwal is making a guest entry in this movie.

The music given by Anoop couldn’t reach to listeners but Back Ground score was excellently composed by Mani Sharma. The movie was planning to releasing world wide on 13th February 2015.

Many viewers took to their Twitter pages to share their verdict on the movie after watching it on its opening day. We bring you audiences’ Twitter comments on the movie. Read the live update of “Temper” movie review by viewers:

Along with his trade mark characterisations and dialogues @purijagan garu also gives a strong script and a super climax. #Temper Tarak takes his acting abilities a notch higher and excels. police station scene and especially the court scene will be remembered for long.

Jst out of Temper .Tarak is a fucking mixture of super confidence nd hyper enthusiasm..in songs he looks like he’s possessed by electricity. In Temper Poori Jagan is in his careers best form be it dialogue,taking and best of all in conception of Hero’s character. Vakkantham Vamsi, Anup Reubens and Shyam k naidu very very finely tempered the steel of “Temper”