Telugu movie “Temper”, which is the second combo Movie of Jr NTR and Puri Jagannath, last Movie was andhrawala  and puri jagannathhas debuted with an overwhelming response at the worldwide box office .

Ever since Director Puri Jagannath announced it, “Temper” Movie has been hogging the limelight for many good reasons.  Music of this Movie has become a big success and its promos and trailers have also impressed Fans, viewers, and made them wait eagerly for this Movie. In addition, the makers of this film have had massive promotions for the film. 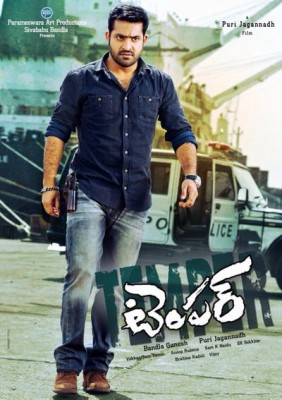 A week before  release of this Movie, “Temper” started trending on social media. Seeing the Jr NTR mania, the makers made advance booking available even before the film cleared the formalities of the Censor Board . All the tickets for its opening day were sold out like hot cakes in many centres, within a half an hours of opening. The film registered over 70% sale of tickets in advance booking in non-Telugu-speaking areas too.

“Temper”  Movie had released in over 1,350 screens across the globe (850 screens in Andhra Pradesh and Telangana, as well as 300 in Karnataka, Tamil Nadu, Maharashtra and other parts of India, and 250 screens overseas) on 13 February. Considering these facts, trade experts and Movie experts had predicted that “Temper” would get a superb response and become the biggest opener for Jr NTR, beating records of his previous films.

Many ardent fans of Jr NTR spent a sleepless night, as the screening of “Temper”  Movie began at 4.00 am on Friday in several theaters across the country. The film registered 100% occupancy in early shows everywhere and also got positive responses from movie buffs and critics,public.

As per early trends, “Temper” Movie  is likely to collect more than ₹10 crore at the worldwide box office on the first day of its release. The Movie is expected to beat the opening day business records of “Baadshah”, which happens to be the biggest opener in the career of Jr NTR.

Stay tuned to this space to read the first day collection report of “Temper” Movie.