Skip to content
Entertainment|Tollywood
January 24, 2015January 23, 2023 Admin 0 Comments
Maverick director Ram Gopal Varma who just watched Mahesh Babu’s ‘Aagadu’ film,posted his comments in his Twitter page.  With the tweets of RGV, it shows that the director is seriously not impressed with the film.

“Just watched Aagadu nd now going to watch Dhookudu,Businessman and Pokiri nd I sincerely think Mahesh also should do the same. Am told Aagadu is a 75 crore film nd.In sheer comparison Maghadeera looks like a 750 crore film My comparison between “Aagadu” and “Magadheera” is mainly because they both are the most expensive films for their own individual times,” wrote RGV. 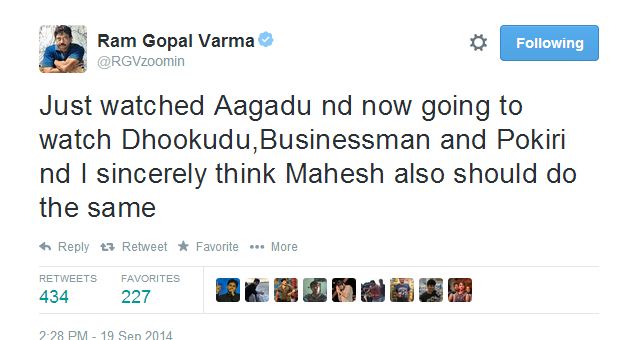 We will have to wait and see as how  Mahesh Babu fans received these comments of comparing Aagadu and Magadheera. Fingers crossed that they won’t turn controversial.