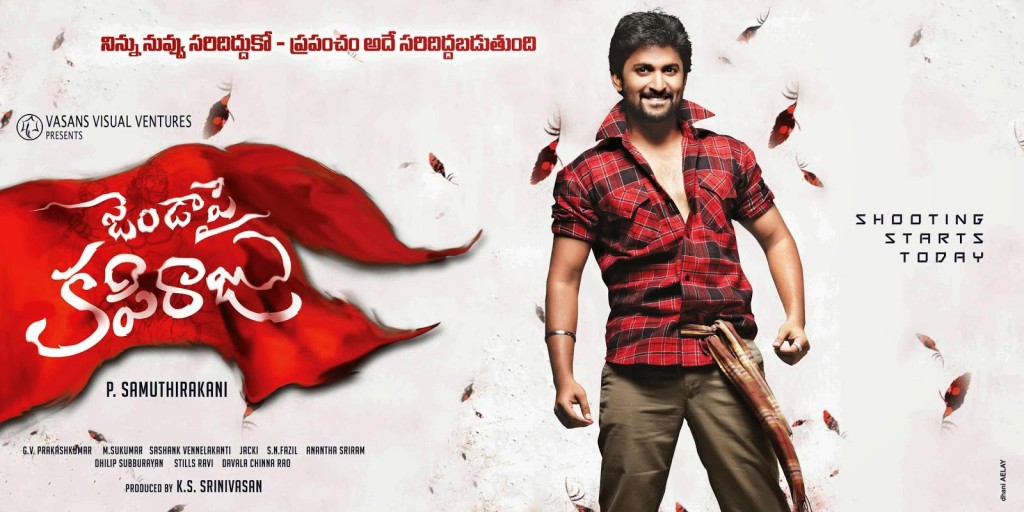 Janda Pai Kapiraju (English: Monkey King on the Flag) is a 2015 Indian Telugu action-thriller movie was written and directed by Samuthirakani starring Nani and Amala Paul in the leading roles. The film’s soundtrack and background score was composed by G. V. Prakash Kumar. This movie was simultaneously made in Tamil as Nimirndhu Nil with Jayam Ravi by replacing Nani. While the Tamil version released in February and went onto become a BlockBuster movie, the Telugu version is awaiting release. Nani will be playing a dual role in his career for the first time in this movie.

The film was launched on August 1, 2014 at Annapurna Studios. The film’s first schedule of shooting started a day later.Hero Nani plays dual roles – that of a 24-year-old and of a 18-year-old. Heroine Amala Paul will play the female lead in both the versions. This movie will be produced by KS Sreenivasan’s Vaasan Visual Ventures. Meghana Raj was reported to have an important role in this movie but she said on Twitter that she was not acting in this movie Ragini Dwivedi was roped in to play an important role. By March 2013, shooting of this film was said to be 50% complete and first look was launched on hero Nani’s birthday.The next schedule began in the same month at Hyderabad whose duration was of 3 weeks in which scenes on Nani and Amala Paul were shot. On November 26, 2013 Nani on his Twitter revealed the looks of his Dual roles. On December 5, 2013 a press note was released which revealed that the film’s shoot was wrapped up that day.This movie is scheduled to be released on 21 March as per film sources.