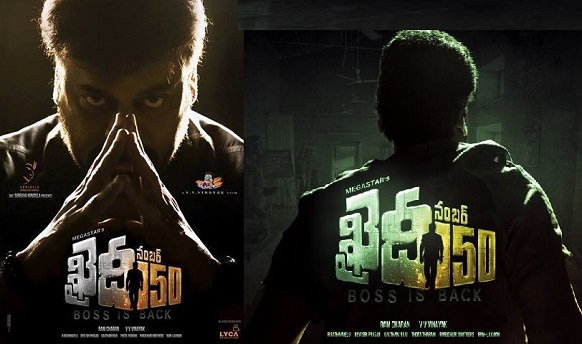 Film unit has named the remake version of katthi as Kaidhi no.150.

Chiranjeevi acted in 145 movies so far and 4 guest roles in other languages. Totally it was his 150th movie. Chiranjeevi’s 149th movie was Magadheera as he appeared in this movie in the guest role. After a long time gap, Chiranjeevi acted in BruceLee-The Fighter in the chief guest role. He has nailed the character. In spite of the film result, he got a huge applaud in the film with his entry in the film. And now it was the turn of him to act in the full-length movie. Katthi was all about the Groundwater problem. Chiranjeevi’s hit movies like Tagore, Stalin were message oriented movies. And of now Remake of katthi is also a strong message oriented movie. He was the only apt for this movie in the sense of acting. Chiranjeevi took a long gap after the exit from Tollywood. And now he selected a big film remake and let’s wait how it is going to be. The first look of this movie is going to be released on August 22, 2016.

Chiranjeevi and V.V.Vinayak combo consisting of Tagore as the most successful film in their career as it was the most interesting subject and message oriented movie. His role was to fight against the corruption in that movie and Chiranjeevi acted in that movie with ease and it has shattered many previous Telugu film records. And now the same combo is going to mix up for the prestigious 150th film of Chiranjeevi which was a blockbuster movie in the Kollywood. And it was the very prestigious project for both Chiranjeevi and V.V.Vinayak as it was the re-entry film for Chiranjeevi. It was producing in the Konidella Production house which was maintaining by Mega Power Star ram Charan Tej who was the son of Megastar Chiranjeevi. And the title is going to be announced on august 22, 2016 with the first look of the movie. The prestigious movie of Chiranjeevi was named as Khaidi No. 150.