Ayaan photo sessions create ripples in the social media, his festival special pictures are huge success with netizens. He is son of tollywood Stylish Star Allu Arjun. We know he will turn to industry as he grows up. But coming so soon? Rumours are rife that Allu Ayaan is making onscreen debut with movie ‘S/o Satyamurthy.’
If sources from the unit are to be believed, that Allu Ayaan is not doing any role in the film but will appear for some moments at the end credits. 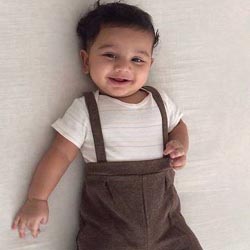 ‘S/o Satyamurthy’ movie first look was unveiled and is getting thumping response from the Mega fans the audio launch is planned for March 15th and theatrical movie release is planned for April 2nd. This is next release after his much successful ‘Race Gurram’ and so this film is riding on many expectations.
This is second time combo coming together of Allu Arjun and Trivikram.