Young Tiger NTR is quite busy currently and is shooting for his upcoming movie Nannaku Prematho in the direction of Sukumar. The movie is currently shooting in London and Rakul Preet Singh is the heroine in the movie. NTR has a special bonding with director Srinu Vaitla and upon his request he accepted to lend his voice for Srinu Vaitla’s upcoming movie with Mega Powerstar Ramcharan. The movie has been rumored to be titled as My Name Is Raju but the makers have confirmed the news officially. The shoot of the movie is currently progressing in Hyderabad currently. 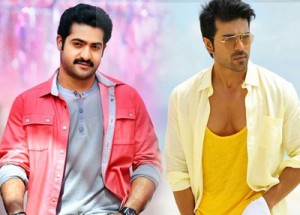 NTR will lend his voice during the introduction episodes of the film and Ramcharan will not be seen in these scenes. Rakul Preet Singh is the heroine and Tamil actor Arun Vijay is playing the negative role. Charan is playing a fight master in this mass entertainer which has done a huge business before the release. SS Thaman is composing the music for the film and Kona Venkat, Gopi Mohan are the writers. Megastar Chiranjeevi is said to play a cameo in the movie which is being produced by DVV Danayya on Universal Media banner. My Name Is Raju will complete shoot and will release for Dasara this year.

Srinu Vaitla is directing an untitled Telugu film starring Ram Charan and Rakul Preet Singh in the lead roles which is produced by D. V. V. Danayya under the banner DVV Entertainments. Kona Venkat and Gopimohan co wrote the film’s script and dialogues while Vaitla himself penned the screenplay. S. Thaman composes the film’s soundtrack. Manoj Paramahamsa too charge of the film’s cinematography.Production commenced on 5 March 2015 at Hyderabad and Principal photography began on 16 March 2015. The film is scheduled for a worldwide release on 15 October 2015. 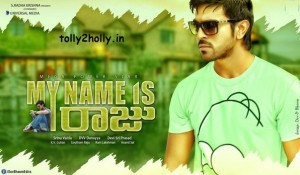 Charan informed the media that the film’s production would commence in February 2015.My Name is Raju, a phrase picked up from the popular song of Jagadeka Veerudu Atiloka Sundari (1990) starring Chiranjeevi and Sridevi, was considered as the film’s title.The makers announced that the film would be a family drama .Principal photography began on 16 March 2015 at Hyderabad and the film’s principal cast participated in the shoot.Two posters featuring Ram Charan were released on 27 March 2015 on the eve of his birthday.