Yennai Arindhaal is upcoming Tamil movie starring Ajith Kumar, Trisha Krishnan, and Anushka Shetty directed Gautam Menon. The Movie set to hit the theatres on 5th February 2015. The movie is having a great expectations that could beat the records created ‘I’ movie. 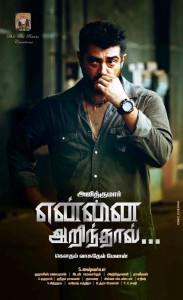 The movie is totally revolves around Sathyadev character from his childhood life to middle level age life. Actually the film has to release former year only but due some issues the movie delayed and finally coming in February.