Yennai Arindhaal is an upcoming Indian Tamil drama-thriller Movie written and directed by Gautham Menon, and produced by A. M. Rathnam. leading stars in this film Ajith Kumar, Trisha Krishnan, Anushka Shetty, Arun Vijay, Parvathy Nair and Vivek. The soundtrack album and background score for the film is composed by Harris Jayaraj . Harris Jayaraj, Gautham Menon reunite after six years this is 11th time hit combo of harris and goutham. This film is edited by Anthony and Dan Macarthur handled the cinematography. 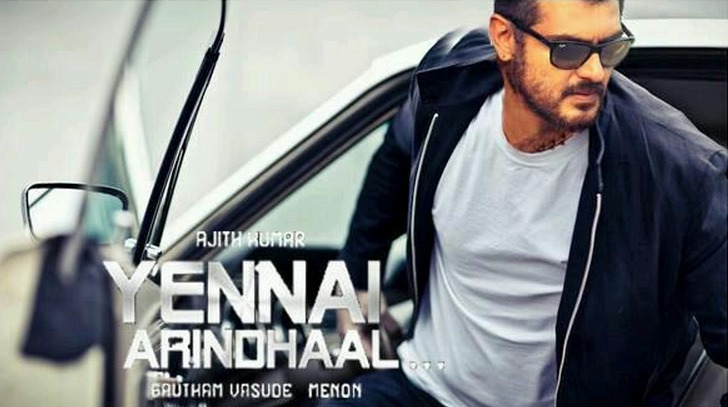 Yennai Arindhaal is the story of a man named Sathyadev, from the age of 13 till the age of 38. The film featured in the Behindwoods list of the “Top 10 most Anticipated Movies of 2014” before it’s release was delayed to 2015.

leading role in this Movie Trisha’s first look  was revealed in August 2014, where she was seen on the sets sporting a saree in this pic. Another still of the actress was made available on the 29th of August 2014. The film’s title and first look poster were reported to be revealed in August 2014, on occasion of Ganesh Chaturthi. However, a still featuring Ajith in his black haired look was released instead, where he was pictured riding a Royal Enfield Bike in this Movie . More stills featuring Ajith and the other cast and crew members were released on the same day on occasion of ganesh chaturthi . The first teaser and trailer of this Movie was released on 3 December 2014, and gained over 5 lakh views within 12 hours of its release on YouTube. The teaser received over 44,000 likes in YouTube, the highest number of likes for a South Indian Movie, in just over a day.

The total story revolves around Sathyadev (Ajith Kumar) life story from his childhood of 13 years to middle level age of 40 years as a cop. Sathyadev falls in love with Hemanika(Trisha) who was already a divorced woman and having a kid too. But after unexpected murder of Hemanika and her kid also kidnapped by goons. Then how Sathyadev has taken revenge on goons and get that kid and who is Thenmizhi(Anushka Shetty) remains in the movie.

Director Gautam has delivered a very good success movie of Action thriller genre which is of his old style. However some scenes are seen which remember his old movies. Finally Gautam managed to get a hit with very good story.

The songs were excellent and Background score was incredibly composed by Harris Jairaj. But the songs are not well placed in the movie according to the situation. Cinematography and Editing was did their job to give perfect output.

Ajith Kumar played wonderful role as cop and another roles which is shown in different shades. This is one of different movie for Thala in his career but this is not the best and Ajith got a success with Yennai Arindhaal after Aarambam movie.

Ajith and Trisha scenes are portrayed very well in movie. The romantic scenes was carried in a very good angle. Other artists Anushka and Arun are done an excellent work that made the film to get hit.

Not much entertaining comedy

Finally Yennai Arindhaal movie unleashed into theaters after many delays in its releases and response was very positive to movie. Especially for Thala fans it was incredible movie to watch for them.

For movie updates and many more please stay tuned to our website.