If you’re a frequent traveller on the San Francisco Bay Area’s famed Interstate 80—sitting there for what feels like an eternity during any time period within a few hours of the official rush hour—then you’ve probably spent a lot of time staring out your window. You check out buildings. You check out the bay. You check out that giant, gaudy purple billboard as you approach San Francisco proper.We’re speaking, of course, about the big, iconic Yahoo billboard. Or, at least, we were. The billboard came down in late 2011 or so (after going up in 1999), and some people really took the loss to heart. There are billboards, after all, and then there’s the Yahoo billboard.”In my experience, big companies are mind-numbing shells of corporate mediocrity–grey, pasty and soul-destroying. The Yahoo billboard was a breath of fresh, funky air with its pastel colors, retro fonts and a beacon that was San Francisco’s giant middle finger to the mundane. It was a reminder of why I moved to the Bay Area. Losing that sign is a loss I won’t soon forget and sad confirmation that Yahoo is less an exuberant shout of joy today than an echo of its former glory,” said ,” said Jonathan Hirshon, principal at Horizon Communications, in an interview with CNET at the time. 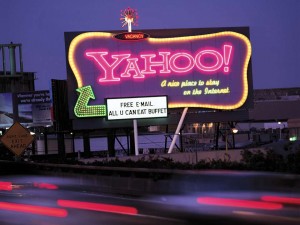 According to reports, it allegedly cost Yahoo a minimum of $65,000 to have said billboard—add on $15K or so if the company flicked on the billboard’s neon lights. (And that’s a fairly cheap amount, given its size and location.) Though it’s unclear what the company’s replacement billboard might cost, given that it’s a little less flashy than its previous one, there’s no mistaking the fact that the Yahoo billboard is back (for now).”As part of our 20th anniversary, I’m excited to share that Yahoo has reclaimed the iconic billboard along San Francisco’s stretch of Interstate 80. The Yahoo billboard is back to surprise and delight Bay Area commuters with fun messages from the company and its employees. To celebrate Yahoo’s return to the space, for the first weekend the billboard’s inaugural message will read, ‘It’s good to be back.’ After that, the billboard will continue to reach commuters with different topical messages tied to Yahoo products, properties and local events that touch their lives. Now that construction is we hope everyone finds a little extra brightness from Yahoo while on their journey each day,” reads a blog post from Yahoo.Given the average commuting times in the Bay Area, we suspect a number of you will have more than enough time to check out Yahoo’s advertising endeavors.