Waiting to watch a good movie for this weekend then here is one for you. Jai’s Valiyavan film has released on 27th March. Valiyavan film is given U certificate so it is appropriate for all age audiences to enjoy the movie. Jai and Andrea play the lead roles in the movie. Valiyavan film is directed by Saravanan. This is Saravanan’s third movie as a director. His first two movies were a Big hit. 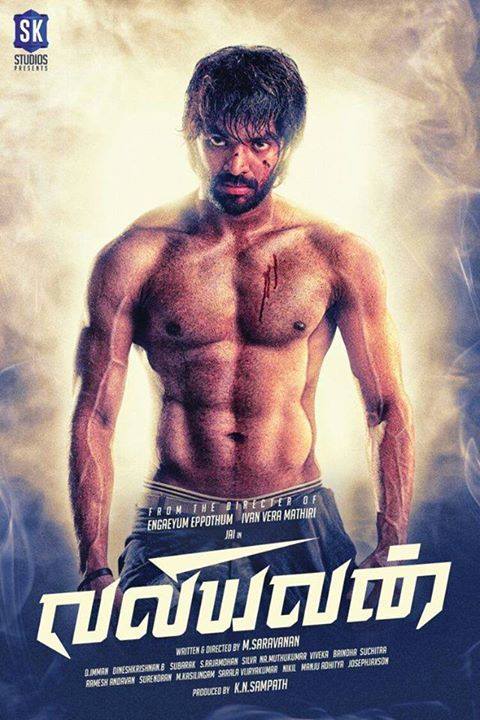 Every hero try to commercial break in his career, for Jai Valiyavan film may given him that blockbuster. Saravanan screen play and direction adds more craze to the movie because his first two movies were a big hit. Jai with six pack body this movie gives jai a good turn in his career. Valiyavan film is based on boxing with social intense. Saravanan is well known for his social messages and real heart touching incidents. These points contribute to his major success. The film’s score and soundtrack were composed by D. Imman. The album consists of 8 tracks, featuring lyrics penned by Na. Muthukumar and Viveka. It was released on 9 January 2015 in Chennai. Jai in Valiyavan movie is looking as a mass hero. While Andrea is a multi-talented girl is playing a full fledged role in this movie after a long time. This may attract the male mass fan once again. Comedian Bala Saravanan is said to have got a meaty role in this flick.

Jai is playing a handsome hunk who learns boxing for his lover. Andrea is in female lead role will pair with jai in Valiyavan Movie. Valiyavan is action, romantic and comedy movie. Herp tries to win the girl’s heart but he can not impress the girl for the first time. But her eyes set on one of her colleagues, there’s dramatic shift in position. This movie has good social message which cant not be revealed. Watch it and enjoy the movie.