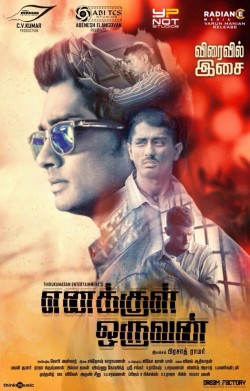 Enakkul Oruvan Producer C. V. Kumar purchased the Tamil remake rights to the successful Kannada movie Lucia (2013) in October 2013 after being recommended into doing so by his technical crew. Ennakul oruvan movie director of the original, Pawan Kumar, revealed that he would work on the pre-production of this movie and help a new director understand the script.

Enakkul Oruvan team held initial talks with actor Bobby Simha about portraying the lead role, but he was eventually dropped. In early December 2013, C. V. Kumar signed on Siddharth to play the main lead role in this movie, while newcomer Prasad Ramar, co-writer of Pizza was assigned the task of directing the venture. Principal photography for the film started on 10 February 2014  and it was announced that Kannada actress Deepa Sannidhi would portray the leading female role in Enakkul Oruvan. Bangalore based Amit Bhargav was signed for a role in the film.[8] In September 2014, the movie, which was started as Lucia, was titled Enakkul Oruvan named after Kamal Haasan starrer of same name.

Audio of this film was launched on 8 September 2014. It was attended by Samantha as an chief guest. The event was also attended by the Actress Khushboo, Actor Vijay Sethupathi. The soundtrack album has consists a total of five songs. The lyrics are penned by Muthamil, Ganesh Kumar and Vivek, while they are sung by Siddharth, Santhosh Narayanan, Pradeep Kumar, Manicka Vinayagam and Dhibu Ninan Thomas. This album received very positive reviews upon release, with a special mention on the fresh ideas of Santhosh Narayanan in each upcoming ventures. The album earned a 200 word review from Milliblog and the track “Yaar” was selected as Deccan Music’s as Best Tamil Song of September 2014. His consistency and back to back hits are being lauded by many critics.

Performance : Siddharth has done an exceptional job where in he alone has burdained the whole movie on his shoulders. He did a great job in enacting two roles at a time which is quite difficult to do where he is quite capable to do. Other supporting characters too were equally supportive. Siddharth’s performance has to be mentioned in this Enakkul Oruvan Review.

Will I Recommend : Yes, for Sure.

Final Verdict : It’s a must watch movie for the gripping story and performances.