Mass Maharaj “Ravi Teja” Starrer “Power” all set to release worldwide this Friday (September 12,2014). Initially Power set to release on august 29th,2014. Later few consequences took around it and even NTR starring Rabhasa locked on the same day, that’s the reason makers postponed the movie by 2 weeks. Power completed all censor formalities on September 3rd, 2014. The CBFC (Censor Board of Film Certification) has certified with an ‘A’ rating. Producer Rockline Venkatesh confirmed the news saying, “The film will be releasing on a grand scale on September 12 definitely. The music of the film has been topping all the charts since it’s release and has created a great buzz about the film. I’m sure the movie will find favor with the audience.” Sources say that, the satellite rights of Ravi Teja’s upcoming movie Power satellite rights have been bought by Gemini TV for a whopping price of Rs 7.5 crores.

S.S.Thaman Composed tunes for this film. Audio launch event took place on 10th August at Shilpa Kala Vedika in Hyderabad. Shreyas Music, which had earlier released a super hit album like ‘Gunde Jaari Gallanthayyinde’, has bagged the audio rights of ‘Power’ too. “Champesindee” Audio track which was sung by “Karthik” tops the chart. Ravi Teja has once again crooned a peppy song. After making his debut as a singer with the song “Kajal Chelliva” in Balupu last year and now its “Notanki Notanki” was sung by “Ravi Teja” and lyrics for the song has been penned by Bhaskar Bhatla. 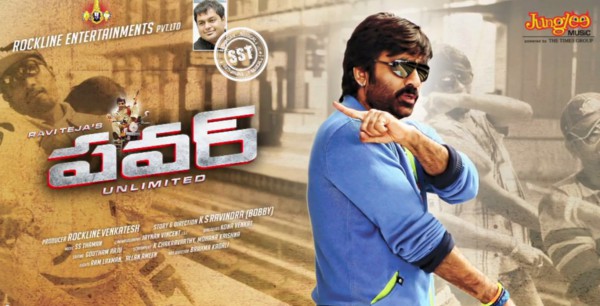 1st look poster and Teaser of the Power was released on the occasion of Ravi Teja’s birthday (January 26th 2014). 1st look poster showed Ravi Teja atop a Royal Enfield bike wearing a police uniform. 43 Seconds Teaser got tremendous response over the Tollywood fans and viewed by 4 Lakh people in YouTube in a short time span. It was the first ever YouTube record for Raviteja. 2nd teaser released on the august 7th, this teaser showed the seriousness and responsible police attitude in Raviteja. After the audio launch, official theatrical trailer was released.

Ravi Teja aka ACP Baldev is playing a cop in the movie billed as a commercial entertainer. Brahmanandam aka Animuthyam plays the funny cop in the film, ably supporting Ravi Teja in the comic department. Brahmanandam and Raviteja combo always entertains the audience. Lets see how it goes in Power?

Thaman Music was very routine as usual his tunes resembled like the tunes of other movies.