After the movie Pandaga Chesko Ram is working for Shivam.Pandaga Chesko is a typical Telugu commercial potboiler that banks heavily on the comedy. Story of this film is beaten to death and there is a deja vu feeling that keeps on haunting the viewers. Although the initial scenes fail to draw any attention, Pandaga Chesko gets interesting after the introduction of Ram and Sonal Chauhan characters.Ram who is known for energetic action is currently shooting at brisk pace for his upcoming entertainers Harikatha and Shivam at breakneck pace surprising everyone.Content wise Pandaga Chesko is an average entertainer and its commercial prospects at the box office solely depend on how the family audiences embrace it during this summer vacation.

Ram who is starring in Shivam under the direction of Debutante Srinivas Reddy is heading to foreign for red hot romance with ravishing beauty Rashi Khanna.Rashi Khanna recently wored for jill which was with Gopichandh the movie Film which is progressing in Hyderabad will wrap its schedule on Aug 4th.Rashi Khanna is pretty as the female lead. Her oozing oomph factor will play big role in attracting male audiences to the theaters. She is a good performer too. She carried off her role with grace and shows lots of promise to become one of the most sought after actresses in Tollywood. Posani Krishna Murali did another full length comedy role in this film. He is good. Kabir is menacing as the bad guy. Urvashi did the supporting role to perfection. Film unit will fly to beautiful Scandinavian countries on Aug 18th. Filmmakers will be canning three songs in Norway and Sweden on Ram and Rashi Khanna.Music is tuned by Devi Sri Prasad for the film which stars Brahmanandam, Abhimanyu Singh,Jayaprakash Reddy, Posani and others in important roles. Ram recently entertained with Pandaga Chesko. 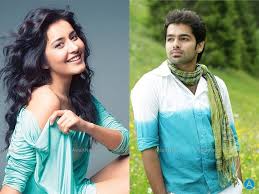