Pisachi (English: Devil) is a upcoming telugu supernatural drama movie written and directed by Mysskin and produced by Bala and cinematography by Ravee Roy. This film leading stars newcomers Naga and Prayaga Martin alongside Radharavi and Harish Uthaman. This Movie is dubbed from tamil movie(Pisaasu) super hit Movie. Music is composed by Arrol Corelli . The film to be released on 27 feb 2015 to positive reviews. 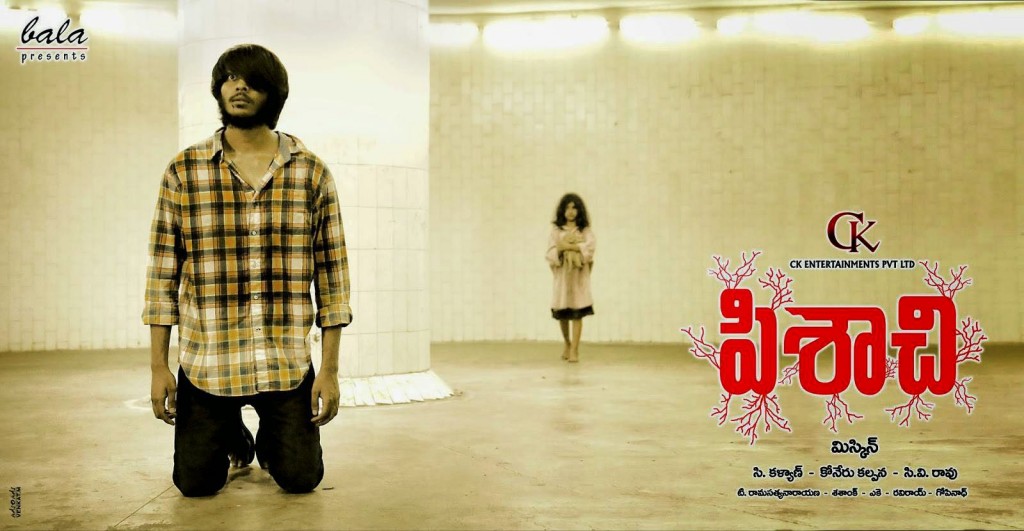 Mysskin, who is best known for his out of  the box concepts, has directed this movie, ‘Pisasu’, and which has been produced by famous director Bala. This Movie is super natural horror thriller, released a few days back in Tamil, has been a big hit there and now in telugu.

Now C.Kalyan, who recently released Tamil super hit movie ‘Aranmanai’ as ‘Chandrakala’ in Telugu, has bought the dubbing rights of ‘Pisasu’ amid big competition. This film will be released as ‘Pisachi’ in Telugu and the dubbing work of this film is completed and movie to be released on 27 February 2015.

It is the story of a devil which robs humans and it is a romantic horror movie. C Kalyan and Koneru Kalpana brought the Telugu dubbing rights for this movie and releasing on CK Entertainments Pvt Ltd banner. Arrol Corelli composed music for this film .

Leading role Siddharth (Naga) is an upcoming violinist in Chennai who stumbles upon with an accident where a teenage girl (Prayaga) is lying in a pool with blood. He takes her to the hospital with the help of an auto driver. However, he is too late  and the girl named prayaga  passes away holding his hand. Traumatized by the whole episode, Siddharth as Naga comes home with one of her slippers. Then  he drives around the city aimlessly with his red car while helping the homeless people in order to ease his guilt for not being able to save the girl life.

After the incident, strange things start happening at Siddharth’s(naga) apartment. He begins to feel a supernatural presence at his home. With the help of his friends, he employs a psychic to exorcise the ghost but ghost turns out to be a fraud and is scared out of the apartment by a strange apparition. Siddharth(naga) also came to realize that his next door neighbour’s autistic son plays with an imaginary friend. When Siddharth’s(Naga) mother comes to visit him, she is hit by a drunk neighbor who is abusing his wife. The neighbor is then attacked by a mysterious ghost. The following day, the mother meets with a freak accident in the bathroom and is saved by the ghost who alerts the neighbors. A petty thief is also stabbed while trying to steal from Siddharth’s(naga) apartment.

Finally realizing that the he is the killer, Siddharth goes to tell Bhavani’s father about the truth. The ghost tries to stop him but he still reveals the truth. Overridden with guilt, Siddharth(Naga) tries to commit suicide. Bhavani’s spirit saves Siddharth from committing suicide by cremating her own body that her father had preserved all this time in the ice, thus moving on to the next world. This is the movie concept.