Paisa Ho Paisa is an upcoming Bollywood Hindi film is scheduled to release on 3rd April 2015 starring Dhruv Bhandari, Madalasa Sharma and Kanishka Soni, directed by Muktha Sunder. Paisa Ho Paisa is a romantic comedy film with several roller coaster joyrides situated on the India roads. This movie is a remake of Sundar’s Tamil film Pathayiram Kodi.This movie is about Bungling cops and Buffoonery Gangsters chasing invisible people / loot and an invisible car. From Pondicherry to Sani Shingapur innumerable comic situations and laugh riot all the way. A road film and a wacky comedy. 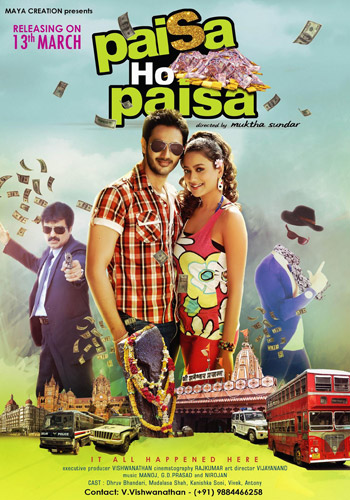 For review and rating check the link given above or below

Ashwin hails from a lower middle class family and all the time he thinks of making big money in short time. Ashwin, Bhoomika and their friends managed to get huge money & jwellery from a lady’s house who is multimillionaire with the help of a chemical. A chemical when it is sprayed on anything or anyone the object or the person becomes invisible. However they are forced to be on the run after being chased by the cops. Now starts the hide & seek drama on the road of 3 groups, buffoonery gangsters, comic cops, bungling CBI officer and the hero and his friends who plays all kinds of pranks. The chase & the laugh riot continues all the way from Pondicherry to Sani Singhnapur crossing 4 state borders with innumerable comic situations.