Telugu Megastars Chiranjeevi and Superstars Mahesh Babu are invited for the audio launch event of Ilayathalapathy Vijay’s Puli. The producers have already invited them on phone and they are likely to come down to Hyderabad in couple of days personally to invite both the stars for the event. We have the information that both the stars are interested in attending the event.Puli  is an upcoming Indian Tamil action-adventure fantasy film written and directed by Chimbu Deven.The film features Vijay in a dual role alongside an ensemble cast including Sudeep, Prabhu, Sridevi, Shruti Haasan, Hansika Motwani and Nandita.Produced by Vijay’s public relations officer Selvakumar, the project has music composed by Devi Sri Prasad, Natarajan Subramaniam as cinematographer and has T.Muthuraj as Production Designer. After beginning pre-production works in early 2013, the film began its shoot in November 2014. The official teaser has been released on 22 June 2015. The film is set to be released in September 2015. 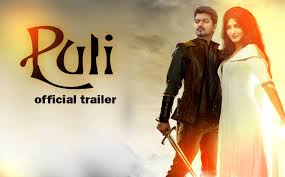 The audio launch event will take place on August 2nd at Confluence Maitiri Hall, ECR, Mahabalipuram, Chennai. Shruti Hassan is the heroine of both Puli and Srimanthudu. Mahesh is likely to attend Puli audio launch on her obligation. Chiranjeevi is obliged to Sridevi, his hit-pair heroine in his prime. Sridevi is playing a crucial role in the Vijay starer.Puli will have a super advantage if both of them come as the movie will have the support of Mega and Mahesh fans living locally when the movie releases. Directed by Chimbudeven, Puli has music by Devi Sri Prasad. The movie’s trailer was recently released but could not attract the audience much. The event should kick-start some hype for the film