Pune city FC finally are finding something good solid run as they won a thrilling encounter with the NE UNITED. The game was equally shared by both the teams as they were quite happy to defend the goal but not to be aggressive. NE strived very hard to make a goal but lost their cool at the last moment.
PUNE always played with the defense of NE UNITED but they could not take it pierce it through the “Hero of the Match” T.Rehnesh who was like a pillar not even allowing the ball to pass through him. He displayed all his skills as he made some brilliant saves. Every time Dudu got the ball for Pune it was Rehnesh who saved the visitors.
NE UNITED tried very hard to break the defense but the home side was very well prepared than in any previous instance. NE UNITED had some crucial interceptions but again it was Pune’s defense which came to the rescue of Pune.

T.REHNESH: He dominated the game from the moment the game started he was always kept busy but his excellent composure and awesome technique made him the Player of the match

DUDU: He was always ready and was frequently causing troubles to the NE defense they were left in no man’s land with his attacking game and he was involved in the goal making of the only goal of the match. 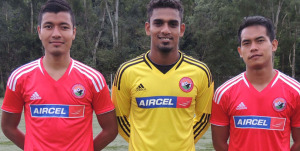