Indian hockey is on a all time high as they are dominating the world number one team Australia. India having lost the first match India has shown what it is capable of by stunning the Aussies in back to back encounters. Indians have had an excellent year of Hockey as they won the Asia cup by thrashing the arch rivals Pakistan.

Indian players have let themselves down as they are continuing to show their skill in all forms of the game. Indian U-21 team has also retained the Sultan of Johor cup by defeating the favorites Great Britain. 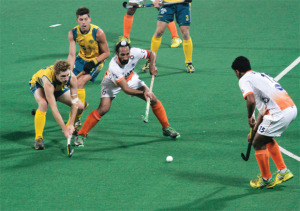 Indians are presently in a tour of Australia and currently tests are being played. Indians lost the first encounter (1-0). But have returned very strongly as they take the lead by dominating the two games with goals (1-0). India lead the series (2-1) in a four match series

Sunil was the player to give advantage in the third encounter. He scored a goal which was the only goal scored in the match. Australians found it very difficult to penetrate through the Indian defense. Indian players caused the Aussies a lot of problem .

Rupinder Pal singh led the side in the absence of the regular captain. This performance has stunned the Aussies as they are on verge of losing series to India. Currently Australians are the world champions and this performance from Indians has totally took them by a surprise.