This Delhi born stylish middle order batsman made an Half century at his homeground.He showed his timing and was involved in a very important partnership with in-form player Suresh Raina who made a mockery of the carrebian attack.These two talented youngsters came at a very crucial time and made important runs for India.They both went on to make a partnership of 105(128b).

Although India made a moderate total at the end it was Kohli’s return to form which has made the every Indian fan happy.After reaching to his half century the smile that V.Kohli had on his face shows it all that what this knock means to him.He made a very graceful 62 of 78balls(5fours).In the pre match show kohli said that he would respect this patch and he just needs one big knock to get him back on track.

Hope this one is that innings which kohli is looking for…. 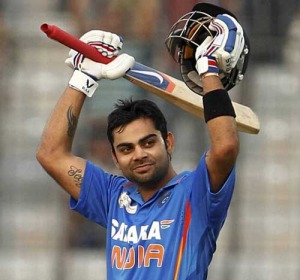