Googles new smart phone Nexus 6 with the configuration and price 32GB memory model now at Rs 44,000/, and 64 GB memory model is available at RS 49,000.
all the leading mobile companies are now looking towards india.every company is trying to give the best models within the low budget, and that too including of all the features
(like:android,large memory,high megapixel camera,apps..etc)

Nexus 6 is also having some other feature which is biometric fingerprint scanning. 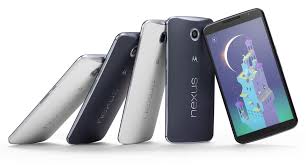 However, now Google nexus smartphone giving tough competition to all the other smart phones, by giving the best product to the consumers within the range of budget.as goggles, earlier smartphones Nexus 4 and nexus 5 have already created craze in the market.
The latest smart phone Xiaomi mi3 is very similar to Google Nexus 5, but it is available half of the price when compare to nexus 5 in the market.in other case consumers of Xiaomi and Nexus 5 phone users complained about the battery backup, and manufacturing.

Nexus 6 the first phone which is running on Google operating system.
there is no clarity about software whether it is based on android 5 or not.

The new version of the smartphone will have the android lollipop to run on it .The latest Operating system which is the successor of the Android Kit-kat 4.4.4.Already the operating system is yet to update for all the android mobiles .