Rajnath Singh may be bland and boring but in the fire and brimstone culture of Sangh Parivar swarming with rabble-rousers, Rajnath Singh comes across as a sober figure with a cool head. Calm, unruffled, civil. The sort of person who, even if someone were to plant a smouldering firecracker under his seat, is likely to continue to stand there pretending that he is only warming his feet- and drone on.Unlike many of his colleagues,who can’t open their mouth without putting their foot into it, he is always extremely measured in his utterances and likes to avoid controversies. But how long can a chip of the old  block, hold his horses? So, on Friday, the mask slipped.Singh turned up in the Lok Sabha in an uncharacteristically confrontational mood – all fired up as if on instructions from HQ, prompting a Hindi TV channel to ask: Rajnathkogussakyonaaya?Well, he was upset, to put it mildly, over the description of acts of terrorism allegedly involving Hindus as “Hindu terrorism”. It was a term, he said, invented by the wily Congress to ingratiate itself with Muslims and give Hindus a bad name. It had damaged India’s image, “weakened” its fight against terror, and helped terrorists from across the border.Wagging his finger at Congress benches, a visibly agitated Singh accused former home minister Sushil Kumar Shindeof “coining” the derogatory term which, he suggested, effectively tarred the entire Hindu community –indeed Hinduism itself.”Terrorism has no religion , caste or colour.In this House in 2013, the then Home Minister had coined the new terminology ‘Hindu terrorism’ in order to change the direction of probe. It weakened our fight. As a consequence, Hafiz Sayeed of Pakistan had congratulated the then Home Minister.Whatever is happening now is the result of the UPA’s policies. 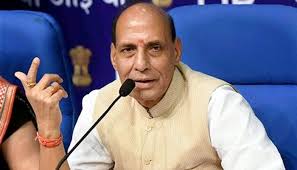 Our government will never allow such a shameful situation again,”he thundered as his party colleagues thumped their desks in approval.Singh’s outburst, which followed a statement he made on the Gurdaspur incident, was completely unprovoked as his statement had been heard with “rapt” attention by Congress members, as ANI news agency reported pointing out that its MPs who had been protesting earlier “suspended their protests and return to their seats” to hear the minister.”We all welcomed, clapped (over Singh’s statement)…because the country is one and there is no compromise on terrorism and unity and integrity of the country,” MallikarjunKharge, leader of the Congress in the House, said expressing his surprise over Singh’s attack.Lest anyone missed the point of Singh’s overblown rhetoric, here’s a deconstruction. It was a classic case of setting up a strawman argument and then striking it down in order to score cheap political points. Nobody had suggested that terrorism has religion, caste or colour; nor indeed was there any mention of Hindu terrorism on this particular occasion.So, what was it all about? Clearly, he was trying to milk the occasion to politicise a sensitive issue by digging up an old comment and quoting it out of context. His ill-tempered speech came from that old, time-tested playbook of right-wing Hindu nationalism: namely portraying the BJP as the sole custodian of national interests and dismissing its liberal critics-in this case the Congress– as “anti-national” .Singh’s rant  was typical of the party’s double standards, its self-righteousness and its divisive agenda portraying Hindus as “victims” in the same way that the Muslim Right remains permanently in a grievance mode.Which tempts me to ask him a question. Assuming that he genuinely believes that terrorism should not be equated with religion, why has he or his party never protested that the mad acts of some followers of Islam shouldn’t be called.

“Muslim” or ” Islamic”‘terrorism? Or that the sins of a few should not be visited on the entire community? How is that a party which gets so prickly at the mention of Hindu or saffron terrorism happily uses religious labels to describe acts of extremism committed by members of other communities?Forget Muslims, what about Sikhs? Remember the Hindu Right’s angry denunciation of “Sikh terrorism” even though Sikhs themselves were suffering at the hands of Khalistani militants, just as Muslims are now suffering at the hands of Muslim extremists? And why didn’t the BJP object to LTTE’s violence being dubbed “Tamil terror” ?Moreover, can Singh deny that Hindus –and individuals with RSS links-have been involved in terrorist activities? Their alleged role in the Samjhauta Express bomb blasts (initially pinned on Muslims as a default reaction) and terror incidents at Hyderabad’s Mecca Masjid and the Malegaon mosque are a matter of record.It was in the context of these incidents that while addressing an AICC session in 2013, Shinde referred to “Hindu terrorism” accusing Hindu extremist organisations of running terror training camps. Faced with the joint fury of the RSS and the BJP (RSS leader Manmohan Vaidya publicly accused the Congress of protecting Muslim terrorists while BJP’s Mukhtar Abbas Naqvi darkly warned of “serious consequences” if Sonia Gandhi did not apologise for her minister’s remarks!) Shinde said he meant to call it “saffron” terrorism.