for complete review click the above or below link

Chitram Kadu Nijam film is a dubbed version of Kannada movie 6-5=2 . This film is directed by Swarna Lata and produced by Good Cinema Group under the banner of Sree Shailendra Productions. This movie featuring Krishna Prasad, Tanuja Janu, Vijay Chendoor, Pallavi, Darshan Apoorva and Mruthyunjaya in the leading roles in the film.This film is based on a real incident that took place on Oct 28th 2010. This film Cinematography is handled by  Ramesh. This film is pictured as a real footage movie to give the natural look of what lead to the deaths and missing of the members in the group. This film is scheduled to hit the Screens on 03rd April 2015 (Friday). Here is the complete Review and Rating of Chitram Kadu Nijam. 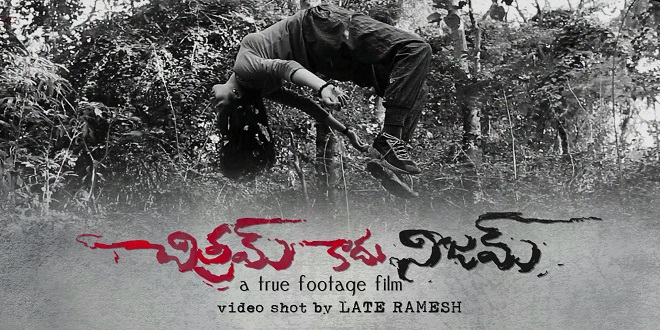 Good in this Movie (Plus Points):

What’s Bad in this Movie (Minus Points):

Chitram Kadu Nijam film Story Line is based on the real story of six youths, who are enthusiastic and plan trekking. This film opens with the narration for the story by Prakash, who was one among the six youths. Ramesh, who will be interested in the cinematography will purchase a new camera and plans to shoot a documentary of their trekking. He will be accompanied by his friends Naveen, Prakash, Kumar, Deepa and Sowmya. They all plan a trek in a forest, which is close to Mysore. They will register their name with forest guards and continues their journey. They will aim to finish the journey in only  single day and return back. Unfortunately, the delayed journey will force them to stay back. They setup a camp somewhere inside the dense forest, where they come across unusual events.

They Ignores Unusual Happenings Six People come across many unusual happenings in and around their camp. They will think ‘Even usual things seems to be unusual in unknown place, and ignore it. this is the movie story.

Chitram Kadu Nijam film is a dubbed version of Kannada movie name 6-5=2 and this film has a real story where the incident took place on 2010. In 2010 Ramesh and his 5 friends had been to trekking, among five friends 3 died and 2 disappeared. After 9 days later Ramesh’s camere was found and there was a Video shot by the late Ramesh. Good Cinema Group and Sri Shailendra Productions are jointly producing this movie in Telugu Version. The original version (Kannada) of this film have got good responses from the audience and collected good sum at the box office. So the same is expected to be repeated in the Telugu version also.