Skip to content
HomeInternationalBoy killed by White Tiger at National Zoo Park Delhi
A sucide attempt by a young boy in National Zoo Park at Delhi and the boy is dead.The incident happened around 1:30 pm on Tuesday 23Sep2014 when the boy jumped himself into the enclosure.The boy who age of 22years is killed by the White Tiger present inside the enclosure after he jumped inside and R.A. Khan, curator,National Zoological Park, Delhi said we wil find details of the dead boy.
A busy park with 5,000 to 6,000 visitors weekdays and 12,000 to 13,000 visitors on weekends and the park is 176acrs wide spread.. 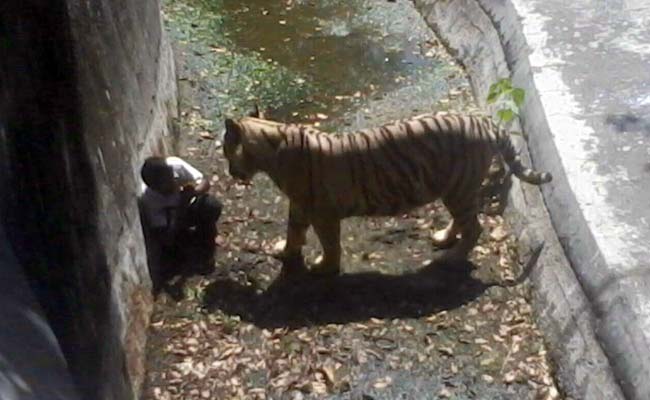 Zoo officials who identified the details of young boy said the age of the boy is nearly 22 years old and named as Maqsood.The live withness who are there at the incident ssaid the tiger as waited upto 15 minutes after the boy is inside the enclosure.The tiger then started to attack the young boy on the neck and all the people who are withness there are trying to divert the beast by driving the stones at it.But all the attempts are not successful and the boy is death and there is live footage of the incident shot by random visitors present there.

Thre police offcials staarted to investigate the incident and other visitors had a compliant of low heights of gates.
Another eyewitness Himanshu said: “The man was cowering in fear and appeared to be pleading with folded hands to the tiger to spare him.” Others said the zoo’s security guards arrived only about 20 minutes after the victim fell in.