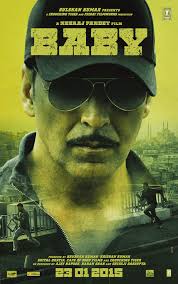 The director Neeraj Pandey was tremendous writer and director. He gave entry in 2008 with Wednesday Movie which has done exceptionally well at box-office and won National Film Award as a best director. But after taking five years of gap he presented Akshay as Special 26 but it has received mixed talks. Neeraj also coming with another project M.S. Dhoni: The Untold Story in this year.

Again this duo was coming with Baby movie after two years. Neeraj tried to give an action thriller output which was same worked for Wednesday. Akshay Kumar is leading role in Baby and after taking three years of gap Rana came with Baby. His earlier films doesn’t gave him output to stand as hero in Bollywood.

Akshay was One of best heroes in Bollywood at present. He made many blockbuster hits with his comedy and action variance with consecutive hits in past. But now facing bit trouble to deal good at box-office. Tapsee was female lead in this movie. She got a very big project in Bollywood after two years. Though she got success with Chashme Baddoor. Tapsee appeared with runningshadi.com movie in former year.

After Special 26 many old staff was continued in this project they are music singer MM Kreem and actors Akshay and Anupam Kher.

Baby movie is full of Terrorism based concept story. Akshay plays leading role in this movie as secret agent. Rana was another supporting actor and Tapsee also plays another agent roles.

Some scenes in second half

The public had much recommended to see this movie. Especially this movie gave feast to Akshay fans and Neeraj Pandey direction was excellent that must watch.

A perfect movie that must see.

Disclaimer: This review is written in the view of writer.So, Please do not judge the movie based on this review and watch movie in theater.