Ex-President APJ Abdul Kalam passes away after collapsing during lecture at IIM Shillong:

APJ Abdul Kalam passed away after collapsing during a lecture at the Indian Institute of Managementin Shillong.1990 Padma Vibhushan Government of India
1981 Padma Bhushan Government of India.Former President A P J Abdul Kalam, a popular head of state between 2002 and 2007, died today after he collapsed during a lecture in Shillong. 84-year-old Kalam was rushed to Bethany hospital in Nongrim hills after he collapsed during the lecture in the Indian Institute of Management at around 6.30 PM. Chief Secretary P B O Warjiri told reporters outside the hospital that he had spoken to Union Home Secretary L C Goyal asking for necessary arrangements to be made for carrying Kalam’s body from Guwahati to Delhi tomorrow morning. “The former President has been admitted to Bethany hospital in a critical condition,” M Kharkrang, SP Khasi Hills said earlier. 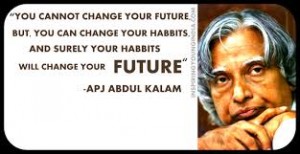 The former President collapsed during a lecture at the Indian Institute of Management at around 6.30 PM and was rushed to the hospital in Nongrim hills in the capital city of Meghalaya, where he is in the Intensive Care Unit (ICU).
Doctors from the army hospital and North Eastern Indira Gandhi Regional Institute of Health and Medical Sciences (NEIGRIHMS) rushed to Bethany hospital. Governor V Shanmughanathan, Speaker Abu Taher Mondal, Home Minister Roshan Warjiri, the Chief Secretary and DGP Rajiv Mehta rushed to the hospital.”The former president was brought almost dead to our hospital. He is in a critical condition. We are trying to revive the patient,” John Sailo Ryntathiang, director of Bethany Hospital, told IANS.”He is in the Intensive Care Unit. We are examining him. We suspect that it could be cardiac arrest,” Sailo said.Meghalaya Governor V Shanmughanathan and Chief Secretary PBO Warjri visited Bethany hospital where Kalam has been admitted.Home Minister Rajnath Singh tweeted, “Deeply saddened at the sudden demise of the former president of India Dr. APJ Abdul Kalam. He was an inspiration to an entire generation.”Delhi CM Arvind Kejriwal tweeted, saying that the “nation has lost a real bharat ratna.”BJP spokesperson Sambit Patra also reacted to Kalam’s demise as he told India Today, “He was a man who was always surrounded by knowledge. He never had an iota of politics around him.” 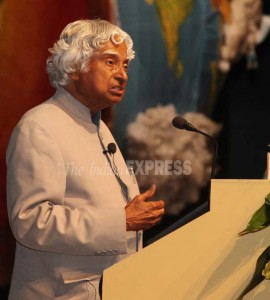 Dr Kalam was born in Rameswaram on October 15, 1931, to a boatman.He played a pivotal role in India’s Pokhran-II nuclear test in 1998, the first since the test by India in 1974. He was known as the missile man of India.For his achievements, he was awarded the Padma Bhushan,Padma Vibhushan,Ramanujan Award,Veer Savarkar Award and Bharat Ratna, and then he became the 11th President of India in 2002.In his book India 2020, Kalam strongly advocates an action plan to develop India into a knowledge superpower and a developed nation by the year 2020. He regards his work on India’s nuclear weapons programme as a way to assert India’s place as a future superpower. He has also received honorary doctorates from 40 universities.He has also received honorary doctorates from 40 universities.The Government of India has honoured him with the Padma Bhushan in 1981 and the Padma Vibhushan in 1990 for his work with ISRO and DRDO and his role as a scientific advisor to the Government.In 1997, Kalam received India’s highest civilian honour, the Bharat Ratna, for his immense and valuable contribution to the scientific research and modernisation of defence technology in India.In 2005, Switzerland declared 26 May as science day to commemorate Kalam’s visit in the country. In 2013, he was the recipient of the Von Braun Award from the National Space Society “to recognize excellence in management of and leadership for a space-related project.” 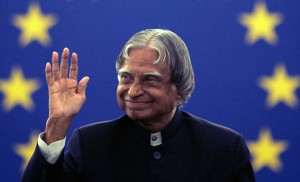 A.P.J.Abdul Kalam whereever he goes he will be always in the heart of very Indian….