Anekudu is a dubbed version of Tamil film Anegan blockbuster Movie released on 13 feb and it is a romantic entertainer film directed by K V Anand under the banner AGS Entertaintment. Anekudu movie leading roles Dhanush, Amyra Dastur who debuted in Bollywood with Issaq and Karthik Muthuraman in lead roles. Anekudu Movie Produced by AGS Entertainment .the Movie audio track album and background score was composed by music director Harris Jayaraj and Cinematography was handled by Om Prakash and movie editing was done by Anthony. The movie is scheduled to release on 20 February 2015. As per the live audience, the movie has got many positive reviews.

Scroll down for Anekudu telugu Movie review and rating:4/5

In May 2013, K. V. Anand stated that he would collaborate with Dhanush for his next film, which Dhanush confirmed on his social network official page. Anand joined hands with AGS Entertainment for the second time after surya Maattraan (2012), and later it was confirmed that the production company would also distribute the film worldwide.Though it was rumoured to be titled for this film as Thaara Thappatta Ready, it was later dismissed by the director anand.  Dhanush was said to appear in four different looks in this Movie , and that he would not be playing the “moody-sombre” type-role he played in his previous films like Mayakkam Enna (2011). 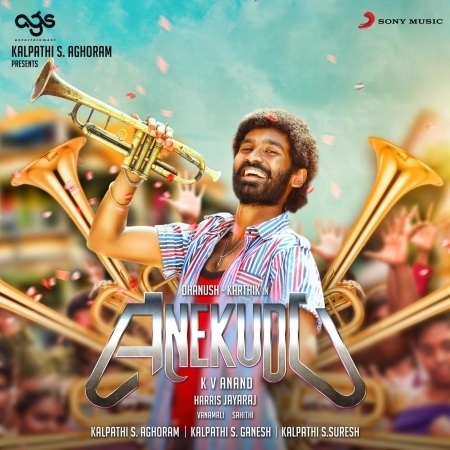 This Movie is a romantic entertainer laced with action was titled as  Anekudu, meaning “the man with many shadows”, according to Tamil poet Manikkavacakar, from his volume, Tiruvacakam later It was revealed that the story comprises multiple period set-ups, and in one of the segments,super star Dhanush goes back to his previous birth.The technical crew consisted of cinematography by Om Prakash,  and editing by Anthony, and action by Kanal Kannan and the dialogues were written by Subha. As with most K. V. Anand films, Harris Jayaraj was once again signed to composed the musical score.

Ashwin, played by Dhanush is a happy go lucky person who works in a private organization. His colleague, played by Amyra Dastur falls in love with him the moment she sees him. Not being able to understand how a good looking girl can fall in love with him so easily, Dhanush doesn’t consider her love seriously. Amyra Dastur, who tries to understand the reason behind her new found love for Dhanush realizes that her relationship with Dhanush goes a long way back. Not just in this life, but Dhanush somehow ends up being her lover in her previous three lives. Amyra also realizes that Dhanush is her soulmate and hence will always be her lover in all her lives that she has been gifted with. Destiny plays the baddie in this film as it makes sure that Dhanush and Amyra never get a chance to lead a life together. Stories from their previous lives have been narrated in an interesting manner. What happens in each of their previous three lives and most importantly what happens in their current lives forms the rest of the story.