After the blockbuster success of Premam,Premam is a 2015 Malayalam romantic comedy-drama film written, edited, and directed by Alphonse Putharen.Produced by Anwar Rasheed under Anwar Rasheed Entertainment, the film stars Nivin Pauly, Madonna Sebastian, Sai Pallavi, and Anupama Parameshwaran in the lead roles along with a supporting cast consisting of Shabareesh Varma, Krishna Shankar, Vinay Forrt and Soubin Sahir in important roles. The film features 17 new actors. Rajesh Murugesan composed the music and background score.The cinematography was handled by Anand C. Chandran.The film released on 29 May 2015 with positive reviews.The film emerged as the highest-grossing Malayalam film of 2015 with a two weeks producer share approximately 11 crore (US$1.7 million). Within 14 days, the film grossed over 20 crore (US$3.1 million) collections from Kerala theatres alone. 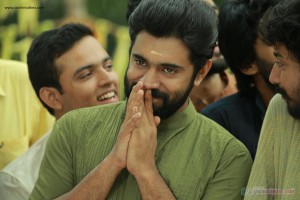 There are more details of Premam:

The Hindu reported, “Youngsters are literally mobbing theatres, cash registers are ringing without stop, theatre owners are being pressured into squeezing in an extra show, and even recommendations are being made for tickets. Due to it timing in bringing the film onto the screens after a long dullness in the mollywood industry, this love-fantasy film is well accepted in the heart of malayali’s. The movie seems well on the expressway to becoming a cult.”P. V. Basheer Ahamed, president of the Kerala Film Exhibitors Federation, said that a similar euphoria was last seen when Mohanlal-starrer Narasimham hit theatres in 2000.After the release of Premam, Nivin Pauly was described as the next Mohanlal in the social medias and got a “superstar” tag.The film and Nivin Pauly’s performance was also appreciated by people inside the Malayalam film industry.In Apsara theatre in Kozhikode, a group of audience turned violent and vandalized after some minor technical snag disturbed the screening of the film.

Nivin Pauly is likely to team up with CV Kumar for a Tamil – Malayalam bilingual film. The shoot for this film is expected to start in the month of October. This would be Nivin’s second Tamil film after Neram directed by Alphonse Putharen, which again was a Tamil – Malayalam bilingual.Apart from this venture, CV Kumar’s Thirukumaran Entertainment banner is likely to produce two more films which too are likely to commence in October; one Tamil – Telugu bilingual starring Sundeep Kishan in the lead and one Tamil horror film.Iraivi, Irudhi Suttru, 144 and the untitled Nalan Kumarasamy – Vijay Sethupathi project are some of the other films that CV Kumar is currently working on.

Watch for more details,reviews and ratings….