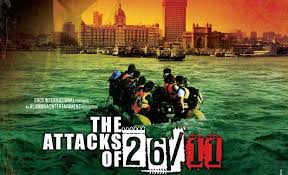 The event was occurred around 20:00 clock on 26 November .Then 10 men came in a inflatable speedboats across two seashores located in Colaba .The attacks were occurred at different     places .

The Chatrapathi Shivaji Terminus was firstly attacked by two gunman, one of them was Ajmal Kasab, who was later caught by the police alive .The attack began over 21:30 by firing using AK- 47 rifles.