Skip to content
HomeBollywoodI want to act in Indian Films says Arnold
Celebrated Hollywood action film icon Arnold Schwarzenegger on Monday expressed his desire to act in a movie of ace film director Shankar and also invited him for the making of “Conan the King”, a proposed sequential in the Conan series.

“What about me? I have come all the way for a job interview with you,” he told director Shankar at a glitzy audio launch function of Vikram starrer Tamil movie “I” which is slated for release soon.
Praising a group of professional body builders who walked the ramp as part of promo events for the audio launch of the film, he said he too wanted to perform in a Shankardirectorial.

Arnold’s first ever visit here has a symbolic significance for the movie as Vikram is portrayed as a body builder in “I.” 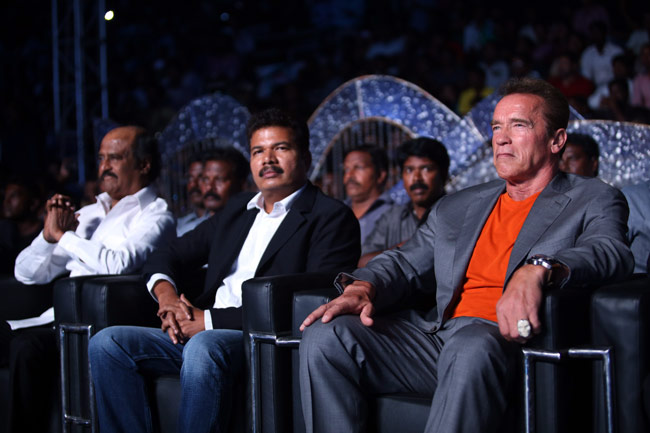 Eleven macho men who walked the ramp gave Arnold a special salute which he acknowledged with warmth.

He shook hands with the men and lauded Shankar for using their services in the movie. He described Chennai as a beautiful city.
Interestingly, the hero in the film is depicted like a young Arnold, a body building champion then with features like a curly hair style. Amy Jackson is the actress in the movie.

The Hollywood actor also invited Shankar in making Conan the King. “How about that..How about [making] King Conan,? he asked Shankar.

Smiling, Shankar nodded his head and gave him a thumbs-up amid thunderous applause.

Profusely thanking the fans, Aascar Films Ravichandran, the producer, and Shankar for inviting him for the function, he ended his brief speech with his famous punch line of “I will be back.”

Arnold got a rousing reception from the thousands of fans in the huge Nehru Indoor Stadium here.

Superstar Rajinikanth and Kannada superstar Puneet Rajkumar were among the host of celebrities who participated in the event.