Lingaa the most awaited movie is yet to release in December . Already the Superstar movie as got good response in youtube in trailer and now its time to listen of the Audio of the the Lingaa Movie.

Lingaa movie  songs are composed by A.R Rahman . The Music director who as given good sounds for the audience and also grabbed the Oscar for Slum Dog Millionaire has worked for the movie. And given as good numbers .

Lingaa movie a Rajinikanth Starrer .The movie also as Anushka Shetty and Sonakshi Sinhain the Movie . 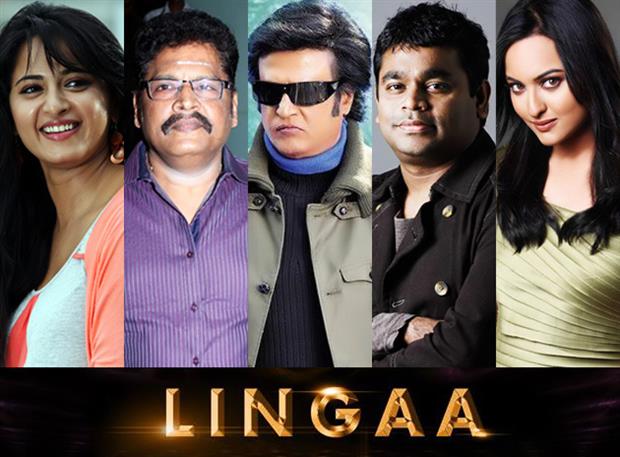 Singers: S.P. Balasubramaniam, Aaryan Dinesh Kanagaratnam
Lyrics: Vairamuthu
2. En Mannavva
Singers: Srinivas, Aditi Paul
Lyrics: Vairamuthu
3. Indianne Vaa
Singers: A.R. Rahman
Lyrics: Vairamuthu
4. Mona Gasolina
Singers: Mano, Neeti Mohan, Tanvi Shah
Lyrics: Karky
5. Unmai Orunaal Vellum
Singers: Haricharan
Lyrics: Vairamuthu
The audio launch of “Lingaa” is all set to take place on 16 November at Sathyam Cinemas, Chennai. The sound tracks for the Tamil and the Telugu versions will be released on the same day, while the Hindi version will release on a different date.
Anushka and Sonakshi play the female leads, while Santhanam will provide the comic quotient. Jagapathi Babu, Dev Gill, Karunakaran, Manobala, Ilavarasan and Vijayakumar are also part of the film’s cast.
While the cinematography is handled by Rathnavelu, the editing is done by Samjith Mhd. The film is produced by Rockline Entertainment and distributed by Eros International. The company has reportedly bagged the distribution rights for a whopping ₹120 crore. They will be distributing the film in Hindi, Telugu, Tamil and other languages worldwide.
“Lingaa” is scheduled to hit the screens on 12 December on Rajinikanth’s birthday.
Lingaa Movie Telugu/Tamil Songs Download,MP3, Listen Online :