Moto G third-gen to be priced at Rs 11,999 and other details leaked on Flipkart:

Motorola’s highly anticipated Moto G third-gen smartphone is expected to launch at the company’s event slated to take place today in New Delhi, alongside events in London, New York and San Francisco. Most of the specs and details about the phone are already out, but now Flipkart has accidentally leaked the 8GB white Moto G third gen priced at Rs 11, 999.The listing also confirms the model ID AP3560AD1K8 and the device will be available with dual SIM slot option. The image also appears to be in line with the ones previously leaked. This time Motorola has ensured that the device is launched with 3G as well as 4G support. Other connectivity options include Wi-Fi, GLONASS, GPS and Bluetooth 4.0. 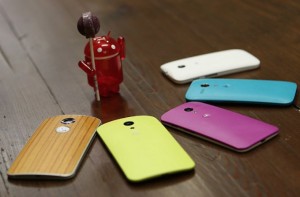 The smartphone will sport a 5-inch HD display with 1280 x 720 pixels of resolution with a layer of Corning Gorilla Glass 3, as rumoured earlier. It Android Lollipop 5.1.1 and come powered by 1.4GHz Qualcomm Snapdragon 410 MSM8916 quad-core processor, according to the listing. the listing reads 1Gb RAM, instead of the recently leaked 2GB RAM. On the camera front, expect a 13MP rear snapper and a 5MP front-facing camera. A 2470 battery completes the package. 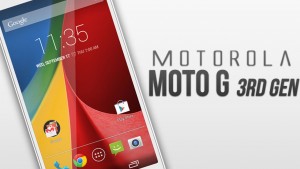 Motorola’s soon-to-be-unveiled Moto G (3rd Gen) has been spotted on an e-commerce website revealing price and features. Though the specification list of  the device is in line with previous reports, we still won’t vouch for Moto G (3rd Gen) features detailed on Fnac as the device is yet to be officially launched by Motorola. Rumours are rife that the new Moto G phone is also expected to come with IP6X water-and-dust-resistant certifications to make it more durable.And the company will launch the Moto G (2015) in two variants –one having 1GB RAM/8GB ROM and another 2GB/16GB ROM combination.