The pattern of the Common Admission Test (CAT) 2015 to be held on November 29 for admissions to prestigious B-schools has been changed to provide an “even” field to candidates from divergent streams and for a better assessment of data interpretation ability.As against two sections last year, there would be three sections in the exam to be held, namely, Quantitative Aptitude (QA), Data Interpretation and Logical Reasoning (DILR) and Verbal and Reading Comprehension (VRC).The test will be held in two sessions on November 29 and results will be announced in the second week of January 2016, a statement said.“Some questions in each section may not be of multiple choice type. Instead, direct answers are to be typed on the screen,” CAT 2015 Convenor Tathagata Bandyopadhyay said in the statement.While, QA and VRC will have 34 questions each, DILR will have 32 questions.Last year, data interpretation was a part of QA and logical reasoning was part of VRC.The duration of the examination has been increased to 180 minutes from 170 minutes, the statement said.The candidates will be allotted exactly 60 minutes for answering questions in each section and they cannot switch from one section to another while answering questions.The use of basic onscreen calculator for computation would be allowed.Director of IIM-Rohtak P Rameshan felt the change in format may bring in more rationality and diversity in gender and academic background as there would be written answers too.The CAT exam has been criticised for being skewed towards candidates from engineering background but the changes could provide an “even field to candidates coming from different streams”, said an IIM faculty.A former IIM director said the changes would help in better assessment of how the future managers can collect data from multiple sources and make sense of it.Registration for CAT 2015 will start on August 6 and candidates can download their admit card from October 15. 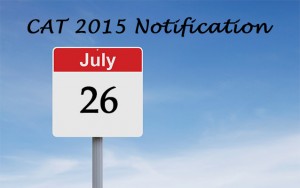 The following table will give you the CAT Exam Pattern of last year.

Duration – 60 minutes for each section
The duration of CAT 2015 will be 180 minutes or three hours. Unlike the previous year, the sections were not time bound and the candidates could select any section to attempt first. The exam was divided into two sections, Quantitative Ability & Data Interpretation and Verbal Ability & Logical Reasoning. This year, there are three sections to attempt. Candidates will not be allowed to switch from one section to another while answering questions in a section. They will be given exact 60 minutes to attempt each section. Unlike previous year, the liberty to attempt any section in any order or switch between the sections has been scrapped. 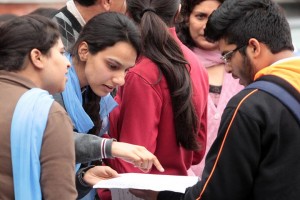 Sections
One of the major change in the CAT 2015 Exam Pattern is an addition of one more section. This year the exam will have three sections, namely, Quantitative Aptitude (QA), Data Interpretation & Logical Reasoning (DILR) and Verbal and Reading Comprehension (VRC). QA and VRC will have 34 questions each, and DILR will have 32 questions. Some questions in each section may not be of multiple choice type, instead, candidate have to type direct answers on the screen.

Last year, the number of sections in the exam were 2, Quantitative Ability & Data Interpretation and Verbal Ability & Logical Reasoning. As mentioned before, there are no sectional time limits and each section consists of 30 questions.

Scoring Process
Till last year, each question had 3 marks. For each wrong answer, there was a penalty of 1 mark. No marks were awarded or deducted on unattempted questions. This year the scoring process has not be defined yet.

Additions in the Mode of Exam
CAT is a computer based multiple choice objective type exam. This will be the first time in the history of CAT that the candidates will be allowed to use basic on-scree calculator for calculations. Candidates will not be allowed to switch from one section to another while answering questions in a section. Some questions in each section may not be of multiple choice type, instead, candidate have to type direct answers on the screen.

Last year onwards, Tata Consultancy Services is conducting the computer based CAT as Prometric, the erstwhile agency completed the 5 year contract. The application process will start from August 6 and will continue till September 20. This year the exam will be conducted in one two in two sessions on Nov 29, across 136 Cities comprising of 650 Test Sites.