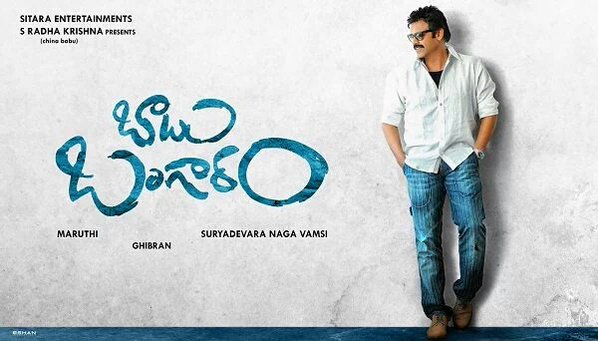 BABU BANGARAM is the movie written and directed by MARUTHI. he was a successful director his first movie was E ROJULLLO, and he became a successful director with PREMAKATHA CHITRAM. With the huge success of BALE BALE MOGADIVOY, Maruthi became  one of the most successful directors in the present generation. and also removed his bad fame against his past movies and became a pefect  director. and he also planned a movie RAADHA with venkatesh and  nayanatara which was a home minister’s Love story which was stopped  due to some reasons, But he again came with a new story with the  same cast and crew.Venkatesh Daggubati, his last movie was Gopala Gopala which was released in 2015 as a multistarrer with Pavan Kalyan directed by Kishore Kumar  (Dolly). after a long time, gap Venky was coming with the clean entertainer. In this movie, venky was playing a dynamic cop role. The released teaser raised up the expectations on the movie which was  looking for a clean entertainer as all of Venkatesh movies.

BABU BANGARAM audio launch was planned to release on 9th july 2016. the theatrical trailer is also going to be released in the event of the audio launch. Fans of Daggubati family and whole tollywood industry  was eagerly waiting for the music of the movie.Music was given by Gibran who was an special music director giving back to back hit songs for his last movies. Fans were also in the positive sense  after listening to the background music in the released teaser which was already a huge hit. They were in a strong belief that the music will be also a success.